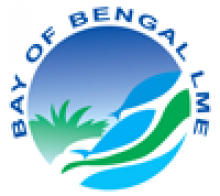 The Bay of Bengal Large Marine Ecosystem (BOBLME) covers more than 6 million km2 of sea in the Indian Ocean. Overfishing, habitat degradation and pollution are the key areas addressed by the BOBLME Project. Pollution issues include organic pollution from agriculture and sewage. Increasing nutrient inputs from rivers have the potential to cause eutrophication and lead to inner-shelf hypoxic zones near rivers, which could expand or be carried across borders, or adversely affect transboundary fish stocks. Increasing river and atmospheric nutrient inputs could also intensify the natural oxygen minimum zone in deeper waters offshore, potentially leading to increasing incursions of hypoxic deep water onto the shelf. The northern Bay of Bengal is projected as one of the world’s areas of greatest increase in DIN export between 2000 and 2030 (Global Nutrient Export from Watersheds [Global NEWS] model (Seitzinger et al., 2010). BOBLME aims to improve understanding of the effects of increasing nutrient input with regard to hypoxia and its impact on the resources of the Bay of Bengal.